Ok, so the title is a slight exaggeration. But this weekend, I successfully made baguettes and I’m really proud.

For Christmas all my dreams came true, and I became the proud owner of this beautiful stand mixer. If you’re feeling pangs of jealousy you can pick one up here! I’ve used it a grand total of 6 times so far this year so would say it is a well loved pressie already!

With this gift creating a theme for my Christmas pressies, I received a whole selection of baking goodies, including this – so a sudden need to attempt baguettes was apparent!

Imagine waking up to the smell of freshly baked bread and bacon sizzling under the grill? Well, that’s what my boyfriend experienced on Saturday morning.

I woke at around 9ish, and popped some ingredients into my magical mixer. I used Paul Hollywood’s recipe, what with him being the oracle of bread and all. It’s a surprisingly simple recipe; flour, dried yeast, salt and cold water. Most other breads I’ve made (mainly pizza doughs!) have oil, and warm water, and often sugar to activate the yeast so I was surprised by the lack of ingredients.

After 7 minutes of letting the mixer do it’s thing, I was left with a “glossy, elastic dough”, just like Paul said I would. Amazing! Next stop is to leave it to rise in a tupperware, and to make a brew! An hour later, what looks like a tub of ice cream is in fact my dough ready for the next stage. 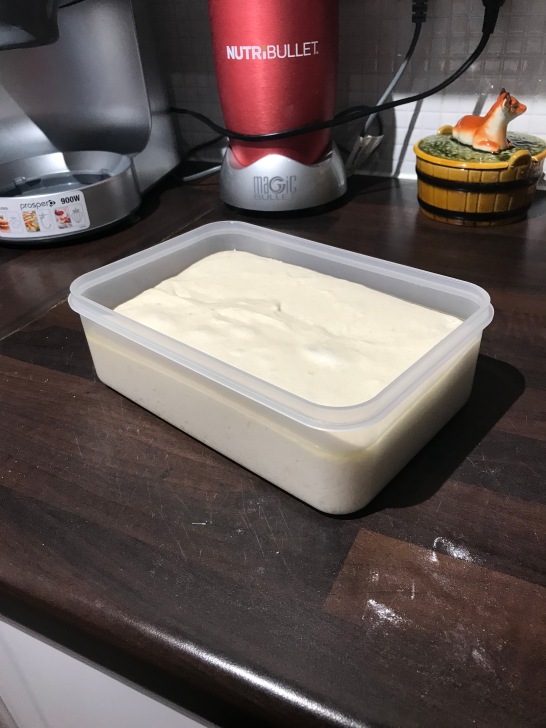 The next step was slightly scary – the shaping. Paul talks quite matter of factly about rolling the baguettes into a sausage shape – but to be careful to not knock the air out of the dough. You don’t knock it back and knead it like you do with other breads, you have to be quite delicate, which is not really my forte!

I “delicately” cut the dough into three. And pretty much threw it onto the baking tray! It was so gloopy and soft that I was struggling to keep it in a specified shape. In hindsight I think I should have been slightly more generous with the flour measurement. Anyhoo, there they are on the tray, ready for baking.

Time for another cup of tea during the second prove. Hoping that said prove irons out some of the lumps and bumps currently present. However I was at this stage feeling better about them after watching a few youtube videos that said that in fact the lumps and bumps create extra crusty bits – so there is in fact nothing wrong with them! Result!

After the final prove, I sprinkled some flour over – for the professional bakers touch – and attempted to slash those trademark cuts in the top of the bread and into the oven they went. Gave myself a quick facial as I opened the oven to get them out – forgetting that you add a tray of water into the oven to produce steam. Note to self, don’t put face right next to oven door when opening.

But here we are – I hope you agree that the final result is really quite good. I made sure to do the whole crust test by breaking a baguette in half just to hear the crustiness, and check out that irregular texture Mr Hollywood is banging on about!

A fab Saturday morning treat, and to be honest not actually difficult to do, you just need time and patience! 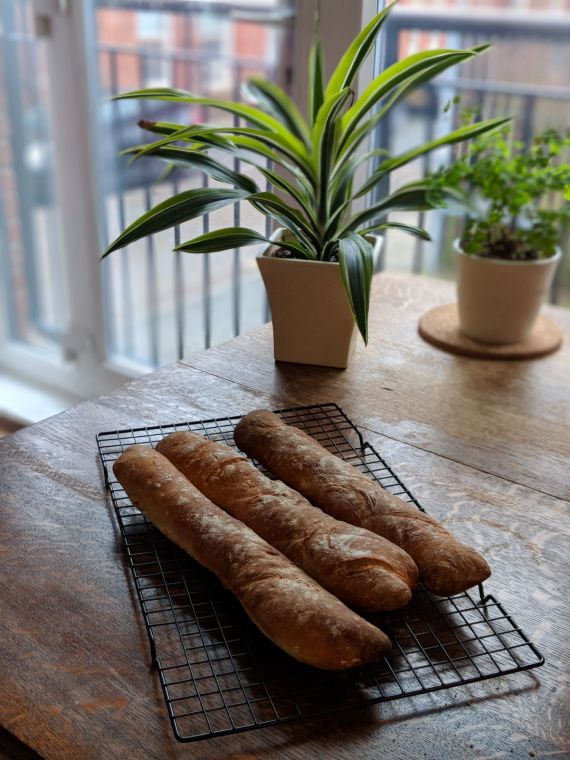