It’s no secret that I’m a talker. I have been known like the sound of my own voice. I like attention, and to be honest would talk to a brick wall if it acknowledged me but I like to think that I know when to say certain things and when not too. I can be a little non PC at times, but only ever in a whimsical way, and only in the right crowd. However, I think there is a really solid thick line with regards to sharing your thoughts on 1. Religion, 2. Politics, and 3. new to the list, Mental Health. What’s that thing about arseholes and having them, but not needing to share them? Well, that.

You can never be too sure what’s going on in someones life. Normally there’s only a few people in that inner circle that know all the ins and out, ups and downs etc. One thing that is really hammered in is that you can never assume. I’ve learnt that lesson the hard way at work and at home, and I feel like it’s a lesson that surely everyone knows by at least the age of 30?

A few weeks ago I was part of a conversation where someone decided to share his views on the world. He shared that he thought that we’ve become a nation of pill-poppers. He suggested that the NHS should just prescribe a meditation app instead of anti-depressants and that people should just learn to cope. I sat there biting my tongue. In a world where mental health is spoken about so openly, I was in shock to see someone having such a narrow-minded view on the situation.

I guess I’m flattered that he thought I was “normal” and clearly didn’t look like someone with anxiety and depression – (whatever that looks like!) otherwise he wouldn’t be so brazen – surely?!

Interestingly this is wikipedia’s depiction of chronic anxiety. Poor woman. 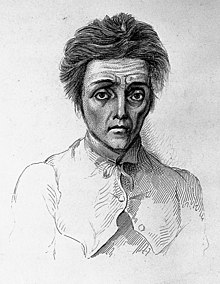 I sat in amazement for a few minutes while the hole continued to be dug, and then had to fight my corner. SOMETIMES MEDITATION DOESN’T ALWAYS WORK!!! I mean, *cough*, *cough*, sometimes you can try the talking therapies, and the exercise, and the healthy diet, and the getting enough sleep, and the long hot bath, but you’re still crying because the sky box isn’t working. Sometimes the chemicals in your brain get confused, and you need some help to get the ducks back in line.

Since taking anti-depressants I’ve actually been quite reassured by how many other people take them as well, friends, and people around me, and maybe we should talk about it more openly to remove the stigma that they’re “crazy pills”.

Obviously they are just the scaffolding, they’re not a long term solution. But they’re a great comforter so that you can focus on the bigger things, and not waste time crying over the sky box.

So here’s my message to the world.

PLEASE don’t be so incredibly naive in the world we are currently living in.

PLEASE keep your opinions to yourself, you never know what’s going on behind the scenes.

And here’s me, surprisingly not looking like the photo above, just looking normal. Well, as normal as I ever will 🙂 xoxo

View all posts by twopintsofcider